Book Review: The Last Days of Night, by Graham Moore 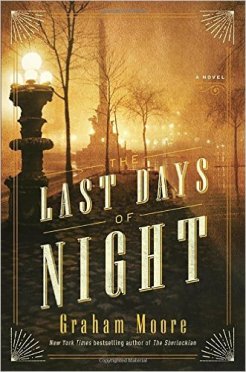 I haven’t posted many book reviews on this blog. Most of the business books I read aren’t that compelling. Most of the fiction I read doesn’t pertain to the themes of this blog. But I recently finished a novel that provides a fascinating look at corporate and legal culture in the 1880s—The Last Days of Night, by Graham Moore.

The protagonist in Moore’s novel is Paul Cravath, a fictionalized version of the attorney who later founded the New York law firm Cravath, Swaine & Moore. Other major characters include Thomas Edison, George Westinghouse, J.P Morgan, and Nikola Tesla. None of these men comes across very positively. In this novel (and the author makes it clear that the book is fiction, though well-researched), Edison obtained his patent on the electric light bulb fraudulently, Westinghouse ordered a fire set in Tesla’s warehouse, J.P. Morgan switched his allegiance from Edison to Westinghouse for financial gain, and Tesla was a complete kook (albeit brilliant).

The book is engaging. There’s enough science in it for science lovers, but it’s easy enough for non-aficionados of science to gloss over it and still enjoy the story. Cravath’s character clearly is representing Westinghouse without really understanding direct current and alternating current, giving readers permission to do the same.

What I enjoyed the most was the look into early corporations—the forerunner of General Electric owned by Thomas Edison, Westinghouse owned by George Westinghouse, and even Morgan’s banking firm—as well as the development of the modern law firm associate structure created by Paul Cravath. There were plenty of corporate and financial shenanigans depicted in the novel, as well as one-up-man-ship between Cravath and his partners. The story could easily have taken place today in the internet world. In fact, many of the chapters open with quotes from Steve Jobs and Bill Gates that are eerily relevant to the electrical industry of more than a century ago.

What I didn’t like was wondering what was true and what wasn’t as I read. Moore confesses in his author’s note,

“This book is a Gordian knot of verifiable truth, educated supposition, dramatic rendering, and total guesswork.”

He offers a chronology of the actual events on his website. However, his changes to the true chronology and the unverifiable actions attributed to the primary characters ultimately caused me to be more skeptical of the book than I wanted to be. Had it been a novel not using real people as primary characters, I could have accepted it much better.

I’ve had some experience at incorporating historical characters into novels (though not in Playing the Game; I’ve written books under another name as well), but I have never depicted true personages as murderers, thieves, frauds, and corporate moles. And when I’ve written historical fiction, I’ve kept my description of events as close to their true chronology as I can.

Still, the author’s note gives me some satisfaction that Moore has accurately described the flavor (if not the chronology) of the invention of the light bulb, the “battle of the currents” between direct current and alternating current, the development of the modern law firm, as well as the implementation of the electric chair for the death penalty. I do recommend the book. But take it with a grain of salt.

What books depicting corporate intrigue have you enjoyed?