An Open Letter to Senators Regarding Supreme Court Nomination Hearings

I have followed a lot of Supreme Court hearings over the last forty years. They are getting worse, and they make every one of you on the Senate Judicial Committee look bad, as well as the rest of you who make unsubstantiated comments about the judicial nominees. Those of you supporting the candidate sound smarmy, and those of you objecting to the nominee seem unhinged.

The downturn in civility displayed in Senate nomination hearings began with Judge Robert Bork in 1987. Judge Bork was a well-respected jurist and professor, albeit definitely a conservative. Plenty of legal scholars had disagreed with Judge Bork’s interpretations of the Constitution before he was nominated, but for the first time a judicial nominee was savaged within minutes after his nomination was announced.

The Clarence Thomas hearings in 1991 became a full-on “he said, she said” debate over allegations of sexual harassment, of the type that can rarely be resolved to anyone’s satisfaction, and certainly not in the circus atmosphere that prevailed during those hearings. The allegations against Justice Thomas were not resolved, and no one really expected them to be resolved—the intent was to smear the nominee’s character.

Neil Gorsuch got off reasonably easily during his confirmation hearings in 2017. But when Senate Democrats attempted to filibuster the vote by the full Senate, Republicans completed what the Democrats had begun for lower court nominations and abolished the filibuster for Supreme Court appointments. So there is no point in worrying about a super-majority. When one party controls the Senate and the Presidency, that party’s nominees are likely to be confirmed.

Judge Brett Kavanaugh has been run through the wringer this past week. Both conservatives and liberals have attested to his qualifications for the Supreme Court. Nevertheless, he has been called, among other things, a racist and a white supremacist.

During her confirmation hearings in 2009, Sonia Sotomayor was raked over the coals for speeches in which she had commented that she hoped “a wise Latina woman with the richness of her experiences would, more often than not, reach a better conclusion” than a white male. While the Republicans’ reactions to Justice Sotomayor’s comments were an overreaction to her prideful statement about her heritage, her statements more clearly revealed bias than the current allegations against Judge Kavanaugh.

Judge Kavanaugh has been accused of being a racist for writing a memo on racial profiling that said the government should not engage in racial profiling. He has been accused of having white supremacist beliefs because one of his former clerks—a Mexican-American of partially Jewish descent—made a (probably involuntary) gesture that looked like a white supremacist symbol.

The Senate Judicial Committee is scheduled to vote on Judge Kavanaugh’s nomination on September 13, and there will later be debate on the full floor of the Senate soon. I fully anticipate that the allegations against Judge Kavanaugh are not over yet. Our nation will have to tolerate more of this indecent character assassination by Senators.

Both parties need to dial it down during these judicial hearings. Way down.

There is no point in Senators trying to show that any judicial nominee is evil incarnate. It is highly unlikely that Satan would ever be nominated to the Supreme Court, even by a President of the opposite party as you.

So just vote against the individual. It is your right as a Senator. As Colin Kaepernick now advocates, just do it.

Don’t needlessly slander the character of the nominee to make your base happy. It belittles you more than the candidate.

Readers, what about our current judicial nomination process irritates you? 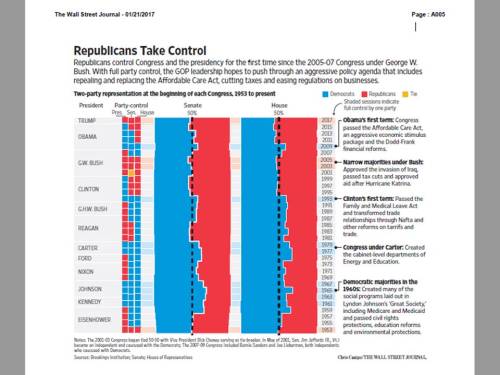 As I have watched and read about the events of the last week unfold, from the confirmation hearings to the inauguration to the marches around our nation, I was most struck by one graphic in The Wall Street Journal, published on p. A5 of the U.S. edition on January 21, 2017. This graphic shows the distribution of power between Republicans and Democrats in the White House, Senate, and House of Representatives from the Eisenhower era to the present—essentially, for my entire life.

I’ve pasted a copy of this graphic above. Here is a link to a PDF of the graphic, if you need better resolution to view it. The information in this graphic really deserves some time and thought—and better commentary than I am able to give.

We are a nation of divided power, and have been for most of the last forty years. Lyndon Johnson and Jimmy Carter could count on Democrats in the legislature to back them (and vice versa—Congress could count on a President of the same party to sign their bills). But since Ronald Reagan’s election in 1980—now 36 years ago—here is the sum total of the periods in which we have had a Presidency united with both houses of Congress:

Only ten of the past thirty-six years have seen our executive and legislative branches united. Four of those years have had Democrat leadership, and six have had Republican.

Another fact jumped out at me from this visual. Congress was a Democrat institution from the 1950s until the 1990s. I knew this intellectually, but seeing it in red and blue in this graphic hit me in the face. No wonder there was a steady trend toward more liberal policies through that forty-year era.

I remember watching the election returns in November 1980 with some conservative coworkers (who were more conservative than I was at the time). As it became apparent that the Republicans would take the Senate, they became increasingly elated—something was happening that most of them had not seen in their adult lives. They were giddy with the possibilities.

The shift toward Republicans began in the Senate with Reagan in 1980, but it didn’t infiltrate the House until Bill Clinton’s administration. The Democrats took Congress back in 2007, and kept it through the first two years of Barack Obama’s administration. Given their forty-year history of control, they must have felt they were taking back their birthright (though, of course, it never was that). But our memories are not so short that we forget that Democratic hubris during the passage of the Affordable Care Act led to the loss of first the House and then the Senate.

As I perused this chart, I wondered if there wasn’t more moderation in both parties when the Democrats could count on holding Congress. There was certainly more breadth to both Democrat and Republican legislators in that pre-Clinton era. Now that both parties can see the possibility of having the majority in the legislative branch, they pander more to their bases. As each takes power from the other, they try to capitalize as much as possible on enacting their goals in the short-term, because they cannot count on the long-term. And they do everything they can to blame the other party, in the hopes of swaying voters to give them back (or let them keep) the reins.

Perhaps we need to consider how parliamentarian systems transfer power without total lurches from one extreme to the other. Or how to deal with those lurches when they happen. The U.S. does not have any institutional memory on how to cope with total shifts in power.

Of course, Donald Trump comes to his term in office as an outsider, with few connections to the Republican Congress that will serve with him. I wonder how his populist strategy will fit with the Washington insiders. Will he reap the benefit of a compatible legislature, or will he distance himself from the Republicans in Congress he will need to implement the changes he says he wants?

Those are my major takeaways as I look at this historical picture of our nation’s distribution of power.

What thoughts to you have about this graphical history of U.S. politics?